So if you need to know the distance to the sun in centimeters, what the weather will be tomorrow or turn on the lights using your voice? Or perhaps you just need someone to talk to at night, when working on your projects? With Amazon's Alexa Voice Service on the Raspberry Pi, this is now a reality, at a very affordable price!

For those of you who don't yet know anything about the Amazon Echo it is a hands-free speaker you control with your voice. Echo connects to the Alexa Voice Service to play music, provide information, news, sports scores, weather, and more—instantly. All you have to do is ask a question. Echo has seven microphones and beam forming technology so it can hear you from across the room—even while music is playing. Echo is also an expertly tuned speaker that can fill any room with 360° immersive sound. When you want to use Echo, just say the wake word "Alexa" and Echo responds instantly. Unfortunatelyit is difficult to get a genuine Echo from Amazon if you live outside of the USA.

According to the GitHub post, the only downside of the Raspberry Pi version of Alexa is rather than it being fully voice-activated, the user can only talk to the device via the use of a push-to-talk button, meaning it's not very useful outside of arm's length.

However Sam Machin and Mason Stone are going a long way to making it voice activated as well and now, thanks to an extensive post on GitHub by Sam Machin, and the Voice Activation Enhancements by Mason Stone, all the code required to build a Raspberry Pi version of Alexa is available online.

A few people have asked me for more info of how to do this, so here is the link where you can find the download source, wiring diagrams and how to install this as well.

https://github.com/maso27/AlexaPi/tree/version1.2  As I said in the video thanks go to Sam Machin for the original versions and Mason Stone for the voice activation.

Crucially, Alexa on Raspberry Pi is now available to everyone outside of the United States, which gives Amazon the chance to increase the service's reach, while also providing the firm with larger amounts of voice and language data for analysis. 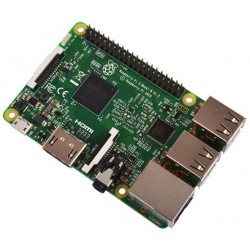